Vietnam by Motorbike part 7 – The Far North (+My Unsalted Opinion Of Sapa!) 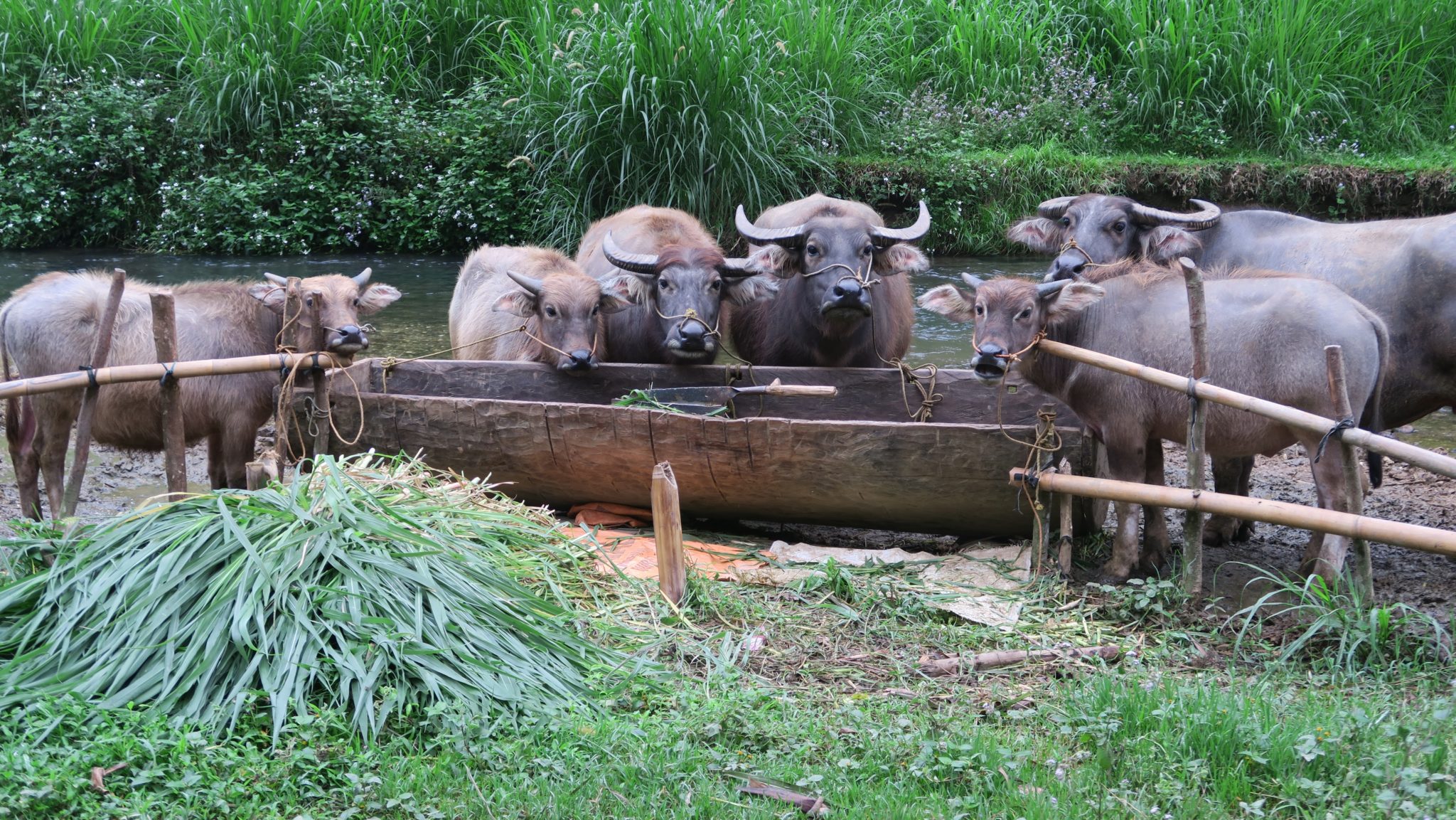 Now it was just me and Alex and we set out to explore the far north of Vietnam, where few tourists venture. Our plan was to go straight up towards the Chinese border and circle westwards and eventually south, back down to Hanoi. 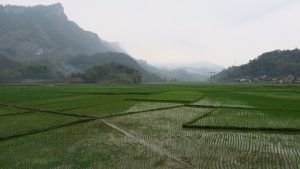 The first destination, Ba Be National Park, was a real treasure. The weather had definitely taken a turn for the worse, most of our first day was spent inside, as it was rainy and misty. Fortunately the homestay (Mr Linh’s) we stayed in was really nice and offered a beautiful view from the veranda. The food was also excellent, as they served traditional local style food. This was always the best food in Vietnam, in my opinion: everyone gets a small bowl, then the food is served on large platters in the middle of the table and you just sample bits and pieces of everything. Roast pork is especially good for this. 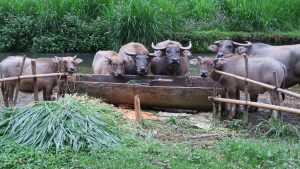 Even the buffalo’s knew we didn’t belong…

It cleared up the next day and we decided to go for a long walk around the area. The guided tours offered by our homestay were unusually expensive, for Southeast Asia, so we decided to just go explore on our own. We walked through the rice fields, watching the farmers do their work, laughing with the kids and being stared at by every living thing, even the buffalo’s. We lamented on how the simple lifestyle these people live is considered a life of “poverty and misery” by most, but it feels so authentic and pure when observing it from up-close, yet so far…

Our next stop, Cao Bang, would bring us a lot closer to the Chinese border and well into the mountains of northern Vietnam. From here on, most towns and places we stayed in were very local and hardly ever saw tourists, at least not in large numbers. Cao Bang was no exception to this, Tripadvisor had a whopping 3 restaurants listed and one of them was a pizzeria, which we had to try of course. The local market offered some nice mango’s, which combined with some pastries from the bakery offered a nice dessert. Beer and coffee was easy to come by and, in good Vietnamese tradition, extremely cheap. 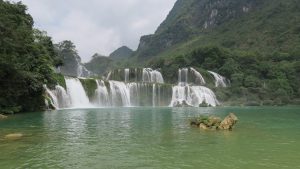 The main attraction here was Ban Gioc Waterfall, a drive of almost 3 hours (90 km) through the mountains, to the northeast. The waterfall is right on the border with China, with the Quay Son River separating the two countries. It’s quite an impressive sight and very quiet, with only a few visitors venturing this far north. Of course, despite Alex’ warnings I might get arrested, I couldn’t resist swimming (most mostly walking, it’s extremely shallow) to the other side of the river and setting foot in China! A quick selfie and I swam back, didn’t seem like anyone really cared, except for some Chinese tourists laughing at me from a bamboo raft. They probably just thought I was being silly.

On the way back, while trying to find a place to eat, we ended up meeting a group of French people on a tour. They were nice enough to invite us to join them for lunch and it was nice to meet some fellow tourists in this place.

After Cao Bang, we traveled west, in the direction of Ha Giang, with stops in between in Meo Vac and Dong Van. It was in Meo Vac that we met a Vietnamese couple, from Quang Ngai, a town way south in the middle of the country, near Da Nang. They were about to get married later and were also doing a motorbike trip in the North on an old Honda Win! The guy spoke English very well and we were able to have a great dinner of Lau (Hotpot) together that night, sharing travel stories and lots of beer of course! They ended up inviting us to their wedding later that month, which we unfortunately had to decline as it was very far from our planned travel route.

The roads between Meo Vac, Dong Van and Ha Giang featured the most beautiful mountain passes I’d driven and this was my favorite part of the whole journey, when it came to the views. Driving through the mountains, we went up to Lung Cu, the most northern point of the country. Here we found a large tower monument, nicknamed the “North Pole of Vietnam”. It offered a great view of the area. 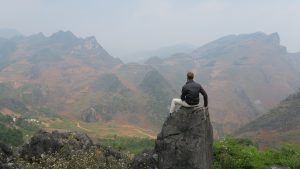 Views over the mountain pass were stunning

Ha Giang didn’t offer much in the form of tourist attractions or things to do, but was a nice place for some downtime. As it was bigger city, it was easy to find good food, places to drink and even a nice coffee shop to do some reading and writing. Alex met up here with a friend he met earlier in Myanmar and was also traveling on a motorbike here. She and her travel partner would join us the next day for a bit, while we traveled on to Sapa.

Sapa is the only place in the far north of Vietnam most tourists know and will visit. As such, the tourist industry has completely transformed it, and not in a good way. It really felt like every building was either a hotel or a restaurant (catering to tourists) and everyone was trying to sell you something, everywhere you’d go. Both Alex and me agreed we hated it and left after spending a single night in a guesthouse there. We didn’t go out of the area though, but down into the valley to a local town called Tavan. 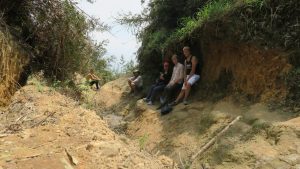 It was still a touristic place, but not nearly as bad as Sapa. And the location is beautiful, with mountains on all sides, covered with rice fields and hilltribe villages. The homestay (Sapa Volunteer) we stayed in was very nice, with super friendly staff and it was nice to meet some fellow backpackers again there. We ended up eating a nice barbeque with a group of 9 people and hiked around the mountains the next day.

The last part of our journey through the north took us from Sin Ho, via Son La to Mai Chau. Sin Ho and Son La were quite uneventful places, although nice enough for just an overnight rest. However, Mai Chau, or more accurately the nature reserve, Pu Luong, right next to it, was something else! An extremely steep incline (first time we both had to plank it in first gear to get up) takes you up the mountain, into a valley of rice farms and small wooden villages, that felt like a completely different world altogether. We both felt like we had just entered an undiscovered part of the world, as it was so pristine and beautiful up there. Definitely one of the highlights of the whole trip!

After Mai Chau we made our way back to Hanoi, to spend a few days there. I would plan the next stage of the journey and for Alex, it would be his last stop in the country.

In my next post I’ll write about Hanoi, going back to Ho Chi Minh City and maybe exploring the far south (although I might split that up).