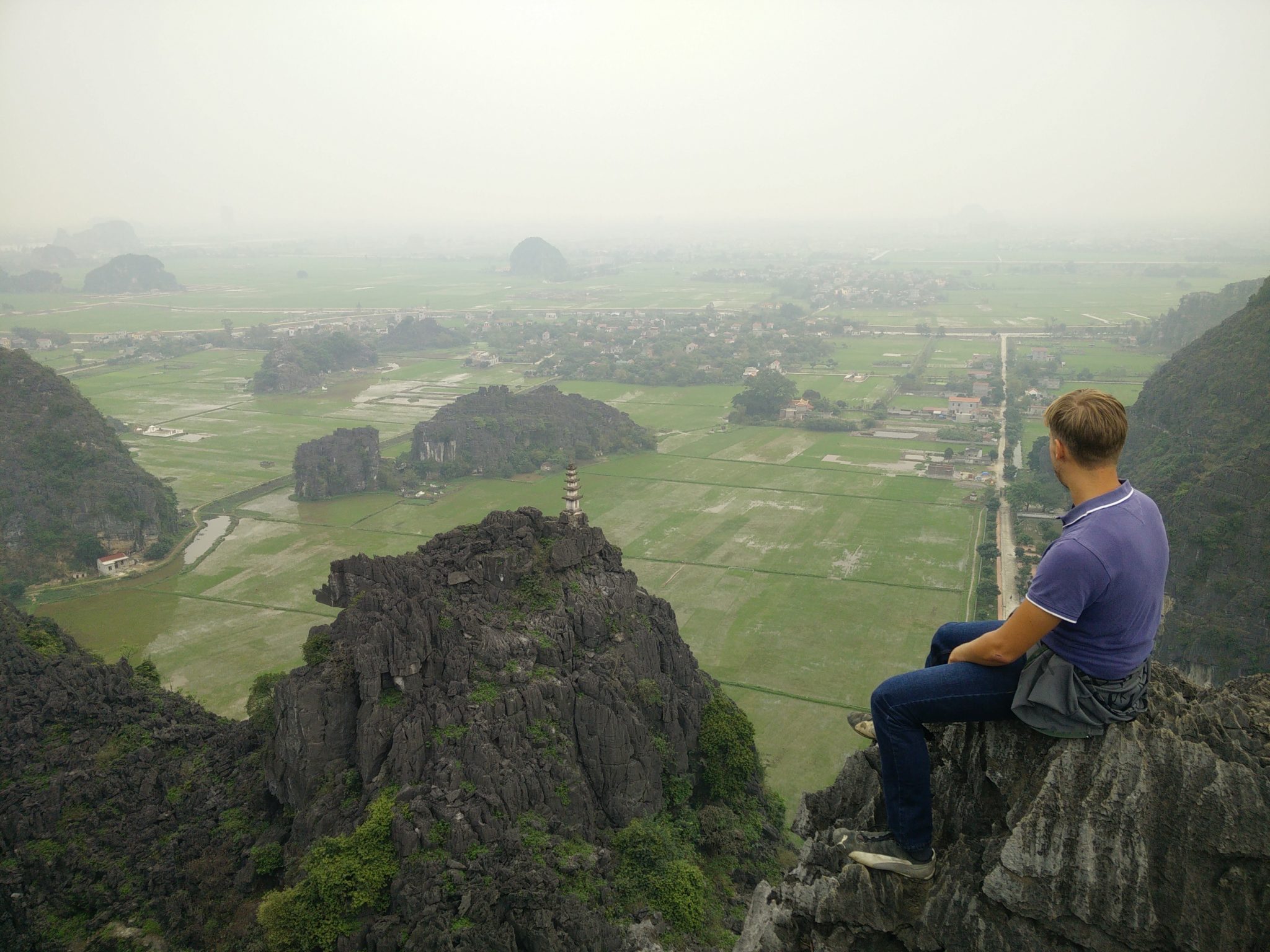 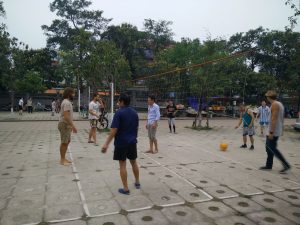 Playing volleyball with locals in Vinh

Since the distance from Phong Nha to our next destination, Ninh Binh, was to far to travel in one day, we decided to make a stop in Vinh. Vinh is quite a big city, but not at all a destination usually visited by tourists. Which always makes of the most interesting experiences. We ended up strolling along the market, watching the locals selling freshly caught fish, crabs and even frogs (yes, they were all still alive!). While walking the streets, many stares following us (what are these foreigners doing here???), we came upon a few guys playing volleyball. And course, couldn’t resist joining in! 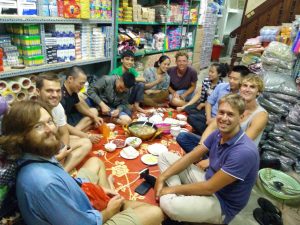 Dinner to celebrate a new elevator (of course!)

Afterwards, Jony insisted on finding us people to sign karaoke with (even though I don’t think any of us actually planned on following through on that). And so, we went to the Big C shopping mall (of course, where else?). Surprisingly, he actually claimed some girls working in the mall wanted to join, however I don’t think we’ll ever find out if that was true. He did however, meet a local family before who gave him a ride when he couldn’t find his way back to us and they were having a dinner party, celebrating a new elevator in their business (yep, any excuse in Vietnam). And we were invited in of course… 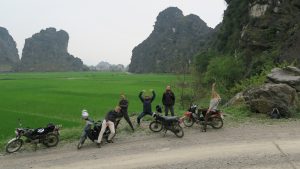 The next day, after this fun experience, was unfortunately not so great. We were properly in the north now and the weather had taken a turn for the worse. It was raining, hard. And since the past few weeks we’d been driving in shorts, t-shirt and sunburn to protect us from the 35° heat, none of us were really well prepared. Luckily, Rick had given me a down jacket when I met him in Da Nang and the local stores had ponchos for sale. And so we set off, through the rain, to our next destination: Ninh Binh.

The shortest route would take us on Highway 1 (the one to be avoided usually), but with this weather we just wanted to arrive as quickly as possible, so we took it. This made for the worst day of the whole trip: driving through rain, being really cold (no gloves, soaked shoes), having to avoid cars overtaking buses overtaking trucks overtaking motorbikes in just two lanes. 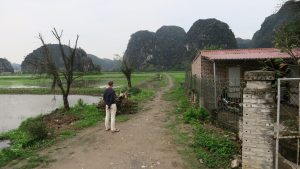 Despite the weather, the homestay we stayed at in Tam Coc was in a beautiful location

Fortunately, the homestay near Ninh Binh, Tam Coc Homestay, turned out to be in an amazing location and we were greeted beautiful scenery. In fact, despite the terrible weather on the way there, the area around Ninh Binh has been my absolute favorite place in the country. The lush green rice fields are suddenly interrupted by giant limestone rocks and mountains. And the best part: many of these are climbable. So that’s what we did, multiple times. As well as pass under them on a boat in the Trang An national park. Another great attraction here was the Bai Dinh Temple complex, a modern (built in the early 2000s) Buddhist temple complex, built around an ancient holy site. The complex was huge and very impressive, including the largest pagoda in Southeast Asia. 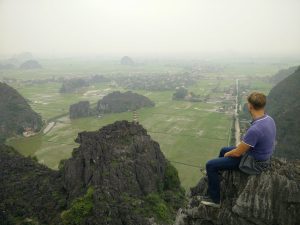 After Ninh Binh, we set off to Cat Ba island, the last place we’d visit together as a group, before splitting up. The island is just south of the famous Ha Long Bay and a trip there on a boat from Cat Ba is one of the best and cheapest ways to visit the bay.

Cat Ba is still in early stages of development when it comes to tourism, but rapidly changing. When we took the ferry from Hai Phong, a big harbor city on the coast, east of Hanoi, we saw they’re building a giant bridge to the island. On the island itself parts of the mountain were making place for bigger roads, to replace some of the smaller and often unhardened roads. That and a giant sign for a resort-to-be are indications of the massive changes that will take place here over the next few years. For now, though, the island is mostly visited by backpackers who aren’t worried by having to take some buses and ferries to get there or are, like us, driving their own motorbikes. 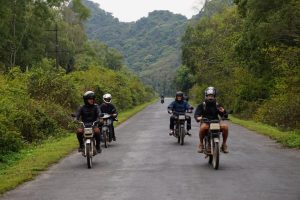 On the day we made our way to Cat Ba, we had some of the worst luck with our motorbikes so far. In the morning, Maciek and Jony’s bikes were both still at the mechanic in Tam Coc and repaired barely in time for us to leave. Then Alex lost most of his luggage rack on the way to Hai Phong. We barely made it in time for the last ferry to Cat Ba, only to be greeted by Jacob having a flat tire upon arrival. Great, now we definitely won’t be there by dark… But, that’s not all, through all this we never really had time to stop for gas. So, I ran out of gas! Luckily we figured out how to transfer some gas over from one of their bikes to mine and off we went again… Or not. Because Maciek’s bike refused to start now. A few local construction workers tried to help us out, but the bike needed a real mechanic this time. Since it was dark by now, we decided to leave his bike there and have him hitch a ride with one of us, to pick it up the next day. And guess what happened then? While taking Maciek back to his bike, then trying to push it up the mountain, it was my bike’s turn to give up. Yep, just stopped under the pressure of the weight I was trying to push and then wouldn’t start anymore… So, I called Alex and him and Jacob drove over from the other side of the island, to have us both TOWED back to Cat Ba city! Which sounds about as crazy as it is. Imagine this: you’re going down a mountain, in neutral, with a rope between your bike and Jacob’s bike in front of you. If you let the rope slack too much, you’ll drive over it, it will get stuck in your front wheel, crashing you and Jacob. So, can’t go too fast, check. But, if you break too much, you’ll end up pulling Jacob’s bike too hard from behind, crashing him. So can’t go too slow either. Break, loose, break, loose, “Jacob, not so fast please….”, “Shiiiiit”, NOOOOOO. “Omg we made it, in one piece…” Yes, we did, but I don’t think I’ve ever been that scared on the bike before. 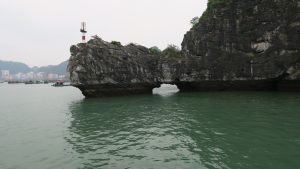 The rest of our stay on Cat Ba wasn’t as crazy, but very nice. We ended up staying in the cheapest hostel ever ($2.2/night) and going for a full-day boat tour around the bay for $15. The weather wasn’t the best (no rain though, just cloudy and a little chilly), but we still had a great time on the sea (and in it, Alex and me couldn’t resist going for a jump in the COLD water). This was actually a big plus though, when we decided to go hiking in the national park on the island itself. The short hike was nice and offered some great views on the peaks of the mountains. The last day of my stay, me and Maciek went for a big (15 km) hike through the jungle, which was beautiful and exhausting. 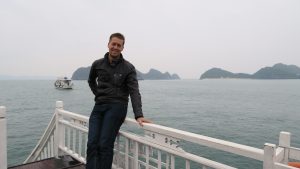 Ha Long Bay, viewed from the ferry back to the mainland

After Cat Ba, it was time to say goodbye to most of my travel partners. Jony and Jacob would go north for a bit, but at a much faster pace than me. The rest of us went to Hanoi, where Alex and me bought some supplies for the journey further north. Maciek would stay there to sell his back and fly back home. Freya, whom we first met in Ninh Binh and then again on Cat Ba, decided to rent a bike and ride with us for just one day to Ba Be National Park.

Ba Be was the beginning of a two week trip through the northernmost part of the country, a very remote and mountainous region. My next post will cover that trip and my unsalted opinion of Sapa!

Here’s the rest of the pictures of this part: https://goo.gl/photos/mpY7HwxodVCzhh9T6