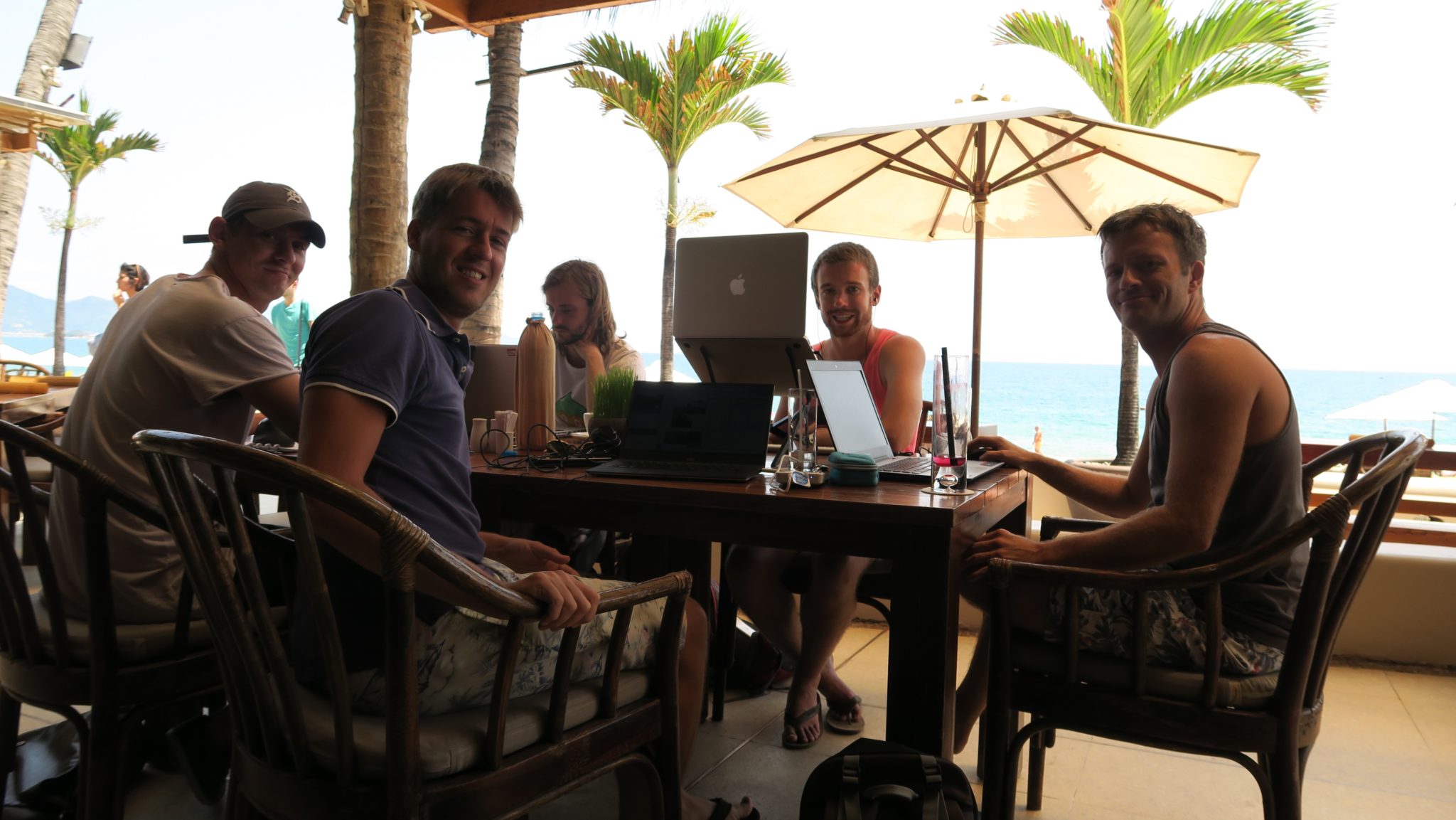 No, this is not going to be a blog post in Russian. But if there’s anything you’ll notice immediately upon arriving in Nha Trang, it will be Russians… The place is packed with them, they’re literally EVERYWHERE. Especially in and near the beach, where my friends, and consequently me, were staying. Apparently, the town is a very popular holiday spot for Russians. Even some of the locals speak Russian or have menus and signs in Russian. They don’t seem to like them that well though, as it happened twice to me that a local came up to me to tell us: “you’re not Russian, you’re smiling!” Hilarious! 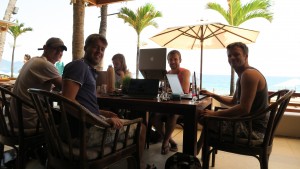 As most of my friends are here long-term, they’re often working on the beach, which leads to pictures likes this…

My friend Jacob was nice enough to allow me to use his couch as a bed for a few nights, awesome! So, Nha Trang turned into my first multi-day travel stop. A few more friends from Chiang Mai were already here: Dan, Peter, Paul, Todd and Andrew. This led to some great dinners and nights out together.

Food in this place is amazing, I’ve had some of the best dinners is a long time here. I love how much beef there is in Vietnam, something I’ve definitely missed in Thailand. It was always either expensive Australian import, or of terrible quality. And another thing I missed: affordable wine! The local wine, Dalat, while not spectacular, is definitely worth it for a mere $2 a glass in many restaurants or less than $4 a bottle in the supermarket…

The night life in Nha Trang isn’t that great, and focuses mainly on the Russians, but the cheap drinks make up for it. As cheap as you think that wine is, the beer is even cheaper here. We found a bar that had happy hour 7-10 pm, where they served beer for 10,000 VND a bottle (450ml), that’s about $0.45!!! 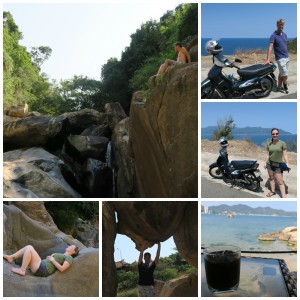 Enjoying the nature around Nha Trang, with Chelsea

Since I had the motorbike, Chelsea and me decided to do some exploring of the surroundings. We visited Ba Ho waterfalls, where I cliff jumped into the water (fun!). The views of the bays and ocean on the way there were ever better than the waterfall itself though, absolutely stunning. Hon Chong, a few large rocks by the sea, was a nice stop as well, although it was filled with Chinese and the highlight was having a seaside cup of Vietnamese coffee. Po Nagar Cham Towers was okay, but nothing to write home about, I’ve seen far more impressive structures in Thailand & Cambodia.

After Chelsea left Nha Trang for Hoi An and we said our goodbyes, I decided to stay one last day. To do the one thing I really wanted to do here, before moving on: scuba diving! Yes, after getting my PADI licenses in Ko Tao, it was time to do some fun dives elsewhere. So I teamed up with Jacob, who joined me on Ko Tao before, and we set off to find a dive school to take us to the reefs around Hon Mun island. For a mere $43, we did two fun dives with Green Star Diving, lunch included.

We were picked up near our place at 7.30 and were in the water by 9.00 for our first dive. It was a very relaxing and beautiful 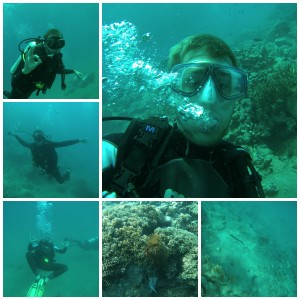 experience. The local divemasters took care of everything, all we had to do was jump in and enjoy the views. I was a little worried about how much stuff our divemaster touched underwater (coral, shells, rocks etc.), as this was a big NO on Ko Tao, for good reason, but other than that the dive was awesome. The reefs were even more alive than the ones we saw around Ko Tao.
The included lunch turned out to be one of the best meals I ate here. In good Asian tradition, several dishes were prepared, on the boat and spread around the table. We all got a small bowl for rice and a pair of chopsticks, while we could sample from the different plates. The dishes included a squid salad, grilled fish, pork ribs, quail eggs and pumpkin soup with beef. Very, very good. And just a great way to eat, on a boat in the ocean after two dives. 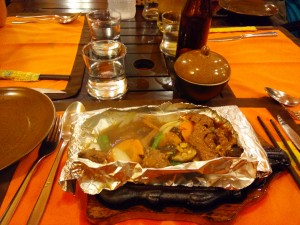 As my last dinner, for now, in Nha Trang I wanted to try one more local dish: Ostrich. Paul had the dish in a restaurant earlier, so I decided to return there and get the same. The meat is very much like beef, but extremely tender and tasteful.

Running on the beach, followed by a swim in the ocean, at 7.30 in the morning, with Dan, Peter and Jacob, turned into a tradition and I didn’t skip my last morning. As I would be driving for a few hours again, some exercise would do me well.

Next up is a few days of driving again, today having been my first. The destination is Hoi An, further up along the coast. But I’m not driving along the coast as the Highway 1 is both boring and dangerous, filled with trucks and buses overtaking eachother at any opportunity. So, my road takes me further inland, to Buon Ma Thuot and up from there, to the Ho Chi Minh trail and then back towards the coast to Hoi An. My next post will most likely cover this journey.

For all pictures taken while diving: https://goo.gl/photos/5v8RYJXK5fyQKeaGA

The other pictures from Nha Trang are in the album I shared earlier: https://goo.gl/photos/m5X4tsgicezJevLe8

Just enter your email below and get ​free instant access: