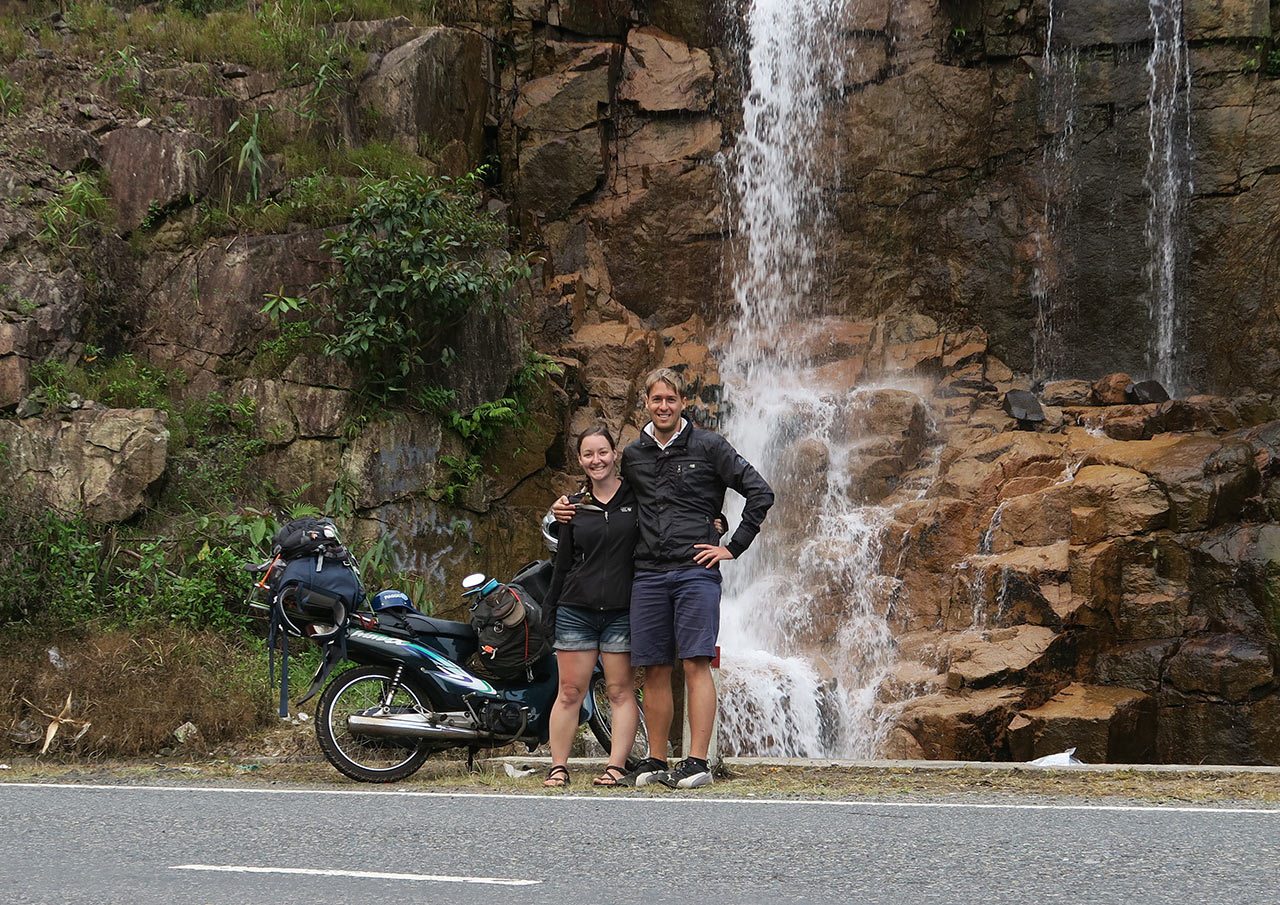 The journey has begun, and off to a great start it was. 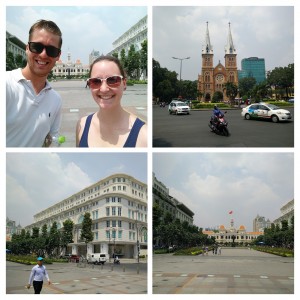 After almost missing my flight in Chiang Mai (I arrived in time but failed to check in for an international flight, as I thought it was domestic due to lay-over in Bangkok), I arrived in Ho Chi Minh City as the evening had just started.
A short taxi ride from the airport to my hostel was the first impression I got of the city, it was busy!
Way busier than Chiang Mai and it felt even busier than Bangkok, mostly because Bangkok has less motorbikes and more cars and it’s bigger, so the business is spread over a larger area.

I stayed in HCMC for two more days after arriving. I met up with Chelsea, a friend I met in Chiang Mai, and we decided to do some city exploring together. For me, the most interesting thing about the city was how much it reminded me of France. It’s very obvious the French colonists left their mark on Saigon, especially the architecture. I missed out on the war museum as Chelsea had already been there and I was mostly in the city to hunt for a motorbike… 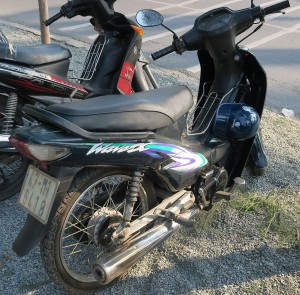 And I found one! It was indeed very easy, I contacted only a few people and one of them was a very friendly local who sold me his Honda Wave 2007 110cc, for a mere $230… A few tweaks, such a luggage rack, a full-face helmet and an oil change later and I was ready for my trip to Nha Trang, to meet some more friends from Chiang Mai that were staying there. 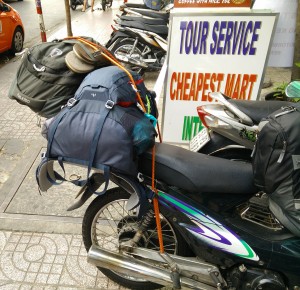 It took us a while to properly fit all luggage, attempt 101 wasn’t very successful, extremely uncomfortable… Luckily we improved our skills at this rapidly!

Chelsea got very excited at the idea of driving there on the back of my bike and so we had to improvise quite a bit to fit two large and one small backpack in addition to two people on this tiny bike! But we managed and in the end got so creative that we managed to have the whole seat while the luggage was securely strapped to the front and back racks. 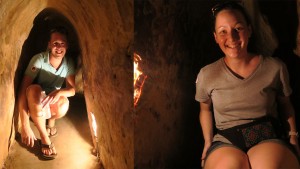 Cu Chi Tunnels, exciting to crawl, but a bit too much of a time-sink for us.

On the last day in HCMC we visited the Cu Chi Tunnels, thinking it would be a quick visit in the morning before driving off later that afternoon. We were unfortunately wrong… it took hours to get to the tunnels and a long stop at a workshop for “unlucky” people (victims from the war) and a very long introduction by our guide, didn’t make the visit any shorter. If you’re ever in HCMC I wouldn’t recommend a visit to the Cu Chi Tunnels, unless you have a lot of time and don’t mind it all taking longer than it should. The tunnels themselves were interesting and fun to crawl through, but not worth the time to me. 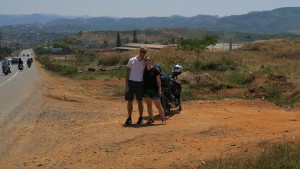 What this meant was though, that we had to make our way to Bao Loc (my pick for an overnight stop between HCMC and Nha Trang) quite late, with at least part of the journey in the dark. That, on my first day of driving this new bike, with three bags and two people… Well it was a little stressful, but the driving experience I gained in Thailand definitely helped and I wasn’t really scared, even though the traffic in Vietnam can be quite unpredictable.

Bao Loc was just an overnight stop and apart from a hotel, a coffee shop and a pharmacy we didn’t really do or see anything there, as the goal was to get to Nha Trang as fast as possible. Pharmacy? Yeah, Chelsea managed to burn her leg on the exhaust pipe of my motorbike, while we were struggling with the luggage, and unfortunately got a nasty blister on her leg in the process 🙁

Fortunately, the next part of our journey proved far more interesting than navigating Ho Chi Minh’s highways and the busy road to Bao Loc in darkness. After Bao Loc, we drove to Da Lat, situated on a mountainside. It was a great place for a short break, enjoying the beautiful views with a cup of traditional Vietnamese style coffee.

Up until Da Lat, the roads were generally quite busy, with villages all around them, a decent amount of traffic and more importantly: so many gas stations you could literally walk from one to the next easily. But that all ended as we left Da Lat. The road through the mountains to Nha Trang was very, very different. 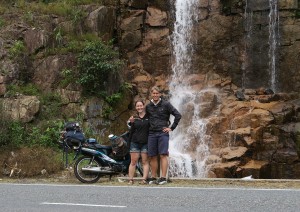 Day 2: waterfalls, misty mountains and running out of gas…

The weather took a sudden change from tropical, warm, sunny to slightly chilly and misty. The road quality was still very good, but traffic was down to an occasional passerby and the sides of the road were filled with stunning mountain views and waterfalls, no towns, or any other form of civilization. Including gas stations… Oops.

Yes, I didn’t exactly plan for that. Combine that with an, at best, unreliable fuel guage, and we were going on fumes down the mountain, hoping a gas station would come up soon. It didn’t, but we passed a few locals with a bike repair shop. And of course 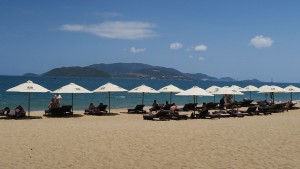 Nha Trang’s beach is stunning, even though it’s packed with Russians…

they were happy to drive over to the next gas station and pick us up a container of fuel… for a price. After some negotiating, I managed to talk him into charging 100,000 VND instead of the initial 200k he demanded. Considering the 3 liters of fuel they got me cost about 40k and 60k is about $2.7, this was hardly a set-back.

Having Chelsea tell me all day that “we are going to drive onto the beach today!”, I unfortunately had to disappoint her, we weren’t going to make it into Nha Trang before sunset, but arrived early enough to meet our friends there for dinner!

All in all an amazing start to my tour of Vietnam. It was super nice to have Chelsea with me, it made it easier to get used to the whole thing, not being alone for the first two days.

The next few days were spent in Nha Trang, hanging out with our friends and exploring the city and its surroundings. I’ll write about that in another post, as this one’s gotten quite long and there’s so much more to say. Tomorrow I’ll be leaving Nha Trang for the next part of my journey, alone this time. I’m quite excited to see and experience more of this amazing country.

For all my pictures, check out my album on Google Photos: https://goo.gl/photos/m5X4tsgicezJevLe8