How to eat low-carb in Thailand (or not?) – The story of my diet 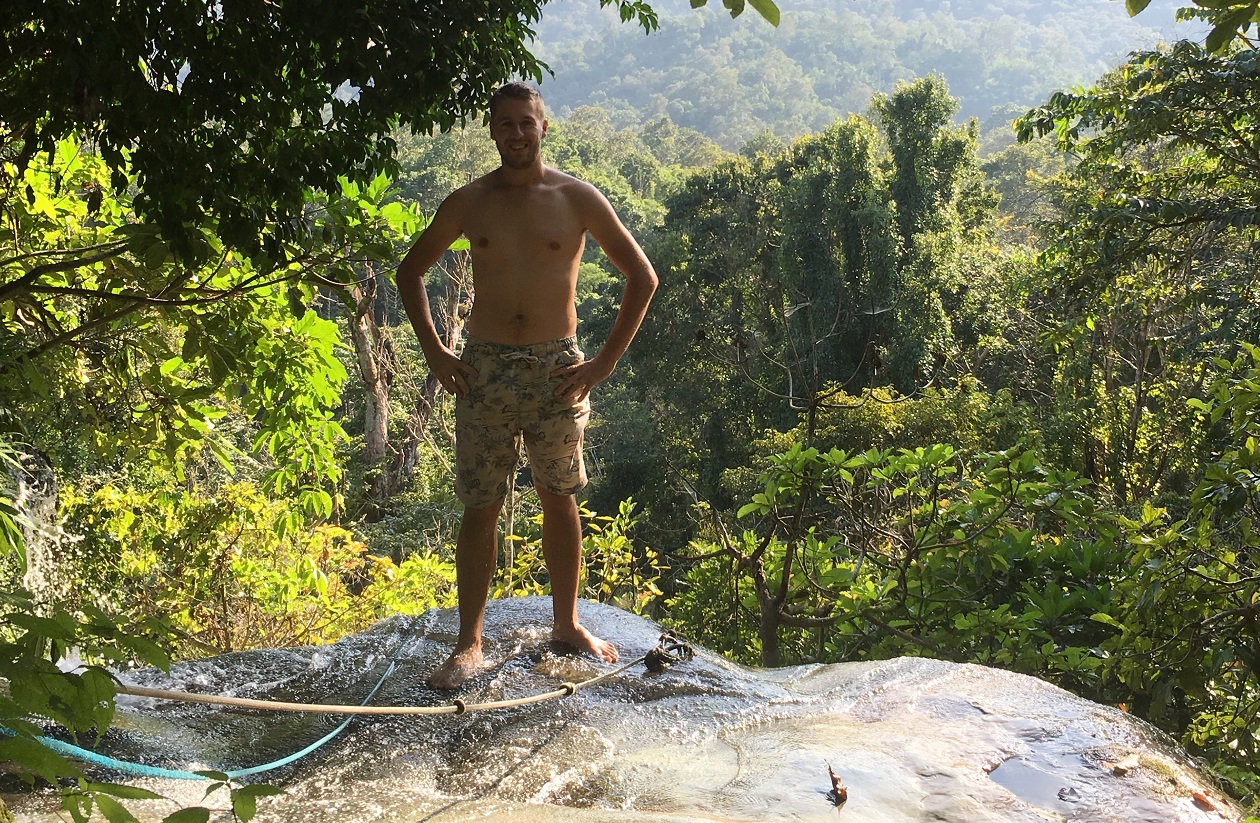 The year was 2011, I was 23 years old and I was in a store, buying clothing. While looking at myself in the mirror of the fitting room, it came to me, for the first time ever. “I am fat”.
Now, don’t get me wrong, I wasn’t obese by any measure, but I had a somewhat different standard for myself. In the first 18 or so years of my life, I was the skinny kid. Not only did I have no fat whatsoever, I was small and had little muscle mass as well. So seeing myself in the mirror, having a somewhat round belly and having to buy pants with a waist size of 36 (now at 32) was absolutely shocking to me.
I had neglected my health for far too long and this was one of the first times in my life where I totally took control and changed everything. Mind you, this was a few years before I discovered Personal Development and before I became an entrepreneur.

Luckily, my parents (especially my mother) had already gone through a similar experience a few years earlier. And after a lot of experimentation, the Atkins diet changed everything for them. This diet restricts all carbohydrate intake and focuses heavily on high-fat and high-protein to compensate. At the time this was quite revolutionary and controversial, but nowadays a diet like that has become a lot more mainstream, in many different forms.
So, I replicated my parents’ success by adopting the same diet, cutting out all forms of starches, such as potatoes, rice, pasta and bread, and sugar. I also bought a road bike and started riding around the country. In just 2 months, I lost 15 kg and the excess fat disappeared almost completely from my face, neck, arms and of course belly. (now that I’m a marketer, I really wish I had taken some good pictures back then, but I really don’t have any before/after photos to show you)
This was the breakthrough for me when it came to health and fitness. From there on, I learned how easy it was to control my own weight. I started cooking my own food a lot more often, learned a few recipes I really liked and even knew where and what to eat if I’d have to buy prepared food elsewhere. Over the next few years I didn’t keep eating a low-carb diet, but always knew to restrict the carb intake if I felt like I needed it.

How To Eat Low-Carb In Thailand? 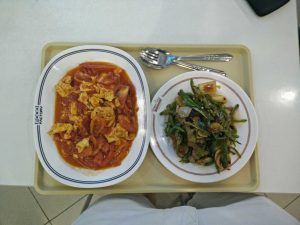 How I often eat now: two dishes of Asian food, heavy on protein and vegetables, without rice or noodles

In 2015 I moved to Thailand. The number one ingredient in almost every meal in Asia and the main source of calories is rice. Eating without rice seems an almost impossible task for anyone living here. But since rice is one of the least-bad carbohydrates when it comes to weight gain, so I never really needed to worry too much about needing a low-carb diet here.
There’s also too much sugar in the food in Thailand. Fortunately my active lifestyle allowed me to burn it off without my body storing it as fat. (side-note: body fat is almost all a result of sugar and starch intake and has nothing to do with fat intake)
But then I went to Vietnam, where food choices were a lot more limited. Rice noodles form about 50-80% of all your meals. Beer costs $0.50. And my only form of transportation was a motorbike.
After two months of traveling Vietnam, and for the first time since coming to Asia, I’d gained weight again. I thought going back to Thailand, eating Thai food and going to CrossFit regularly, I’d lose it again no problem. Unfortunately, that’s not how our bodies work (and I should’ve known better!).
So, I went back to the only real solution I knew of: a low-carb diet. But how the heck do you do that in a country where rice and noodles make up the main ingredients of every meal you eat? Also, I don’t have a kitchen here, I have to eat out all the time.
I realized this was, as always, mostly just a mindset problem. I was so used to eating a certain way in Holland when going low-carb and saw no way to eat like that here. That doesn’t mean it’s not possible though, I just needed to figure it out from scratch.
And so, for the past month I started experimenting again. I started ordering my food without rice. Instead of one dish I’d usually order two, one being mainly meat and the other mainly vegetables. I found out which restaurants serve the best amount for a reasonable price. And I went from there.
Now, about three weeks later, I’ve lost pretty much everything I’d gained in Vietnam. As the diet makes me feel great and I love not having cravings for food, I’m going to keep up with it in a modified form (bulletproof coffee, no breakfast, low-carb for lunch). Who knows, maybe I’ll even get a six-pack at some point… (hahaha who am I fooling?!)
So a few notes on how it’s been going:
– pork is usually a bit more filling than chicken, duck is also great but a little more pricey
– beef is unfortunately pretty hard to come by in decent amounts and quality
– avoiding sugar is too much of a hassle for me and I don’t really need to remove it from my main courses, but do avoid snacks that contain it
– there’s a few places that offer all-you-can-eat salad buffets, these are great for this diet 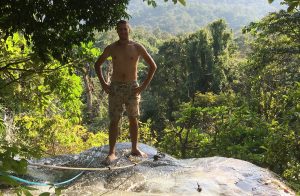 The only valid excuse to post a shirtless picture: climbing the sticky waterfalls near Chiang Mai

The evolution of low-carb

My initial experience with low-carb diets had been based on Dr Atkins’ Diet Revolution. Since then, there’s been a lot more variations on it. The Paleo diet, while not strictly low-carb, is quite similar in many ways.
I recently read both Mark Sisson’s Primal Blueprint and Dave Asprey’s Bulletproof Diet. My main takeaways have been that this style of dieting is far more natural than what we usually consume. Our species evolved in a world where nutrition came from hunted animal food and gathered plants, nuts and seeds. Agriculture really changed all this, but our species hasn’t evolved since and never really adapted properly to the new sources of food created by it (mainly grains). Industrialization only made this worse by creating packaged, processed food, sprayed in chemicals with god-knows how many artificial ingredients.
I really can’t imagine fully complying with either of their dietary guidelines though (in Asia or anywhere else). You’d almost have to own your own farm and produce everything you eat yourself. But that doesn’t mean I haven’t had a few great takeaways from these books and I always keep the guidelines in the back of my head.
The main new addition to my diet, that I’d never tried before, is Bulletproof Coffee. This is coffee, mixed with butter and coconut oil. And it’s supposed to replace your breakfast, keeping you in fat-burning for a few hours after waking up, without having to suffer from hunger.
A while before I’d tried Intermittent Fasting but found it hard to stick it out till lunch without any food. Especially when working out in the morning, which I do almost every day. So, Bulletproof Coffee, has been a great addition to my diet and really helped me to be sharp and energetic in the morning, without being cranky due to lack of food.

Should I try veganism? 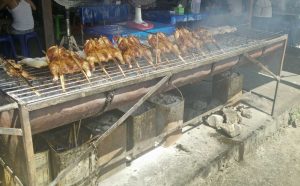 Another favorite of mine in Chiang Mai: grilled chicken, barbecued right on the street

Among foreigners in Thailand, veganism is quite popular. It’s easy to get tons of tropical fruit here at a very low price. Tofu can replace meat in almost any Asian dish.

However, I’m pretty sure I’d hate it. What follows is all my own opinion and reasoning, I respect other people have different views and highly encourage anyone to try things on their own.
First of all, it might be easy to eat vegan in a big city. But when you’re out traveling in the countryside of Asia it’s going to be a lot harder to get good vegan food. I simply don’t want the inconvenience of having to deal with this.
Secondly, I really enjoy eating meat. It’s by far my most favorite form of food. While sugary treats may spike your dopamine and make you feel really great for a few seconds, nothing satisfies me as much as a great steak (which is hard to find in Thailand unfortunately).
And in my opinion that there’s far too many carbohydrates and soy and too little saturated fat and protein in a vegan diet. It’s also much harder to get all of your required micro nutrients unless you supplement or very carefully plan every meal. Our species evolved eating animals, there’s nothing natural about veganism (especially the raw variation, fire was invented by proto-humans, our species evolved afterwards).
But what about the animals, the planet, climate change, pollution  land scarcity etc.? Sorry, sometimes I’m an egoist. This is one of those cases. Any other justification would just be an excuse. Although I believe we’ll have solutions to all of this in the future, as I’m also an optimist.