Rather have some Pai – Holiday Inception 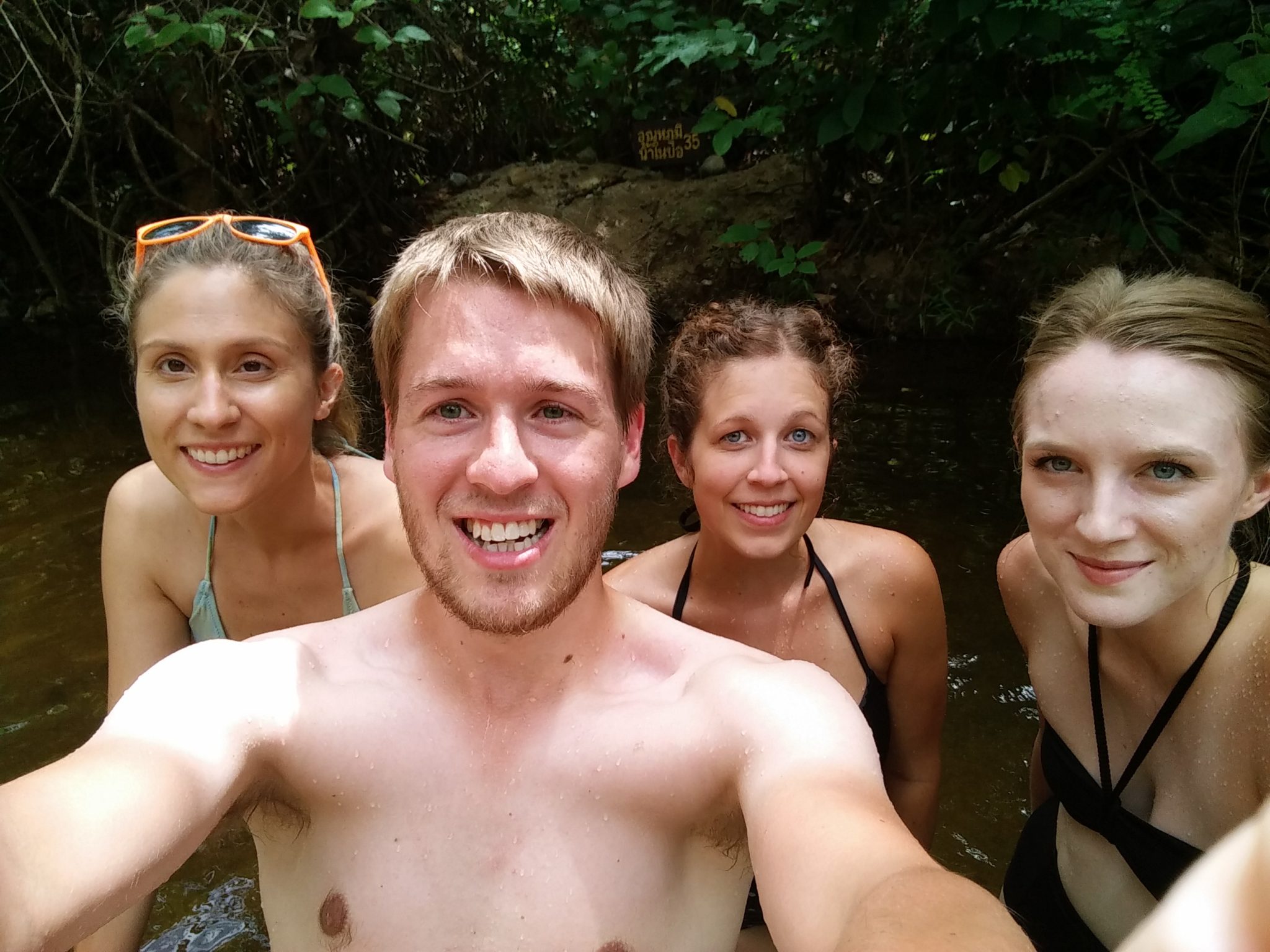 Over the last few days I’ve been enjoying a holiday in a little town called Pai, which lies in the valley of the mountains, north of Chiang Mai, a 3-4 hour drive away. It was absolutely amazing, for so many reasons: the environment, a great group of people, the vibe of the town, some crazy experiences.

We travelled there on Friday, in the pouring rain (unlike most rainy days here, it actually rained all day long). Luckily we decided not to take our scooters there, but rent cars instead. Since we had 13 people going, it was easy to get a good price for 3 decent cars, which made the journey so much more comfortable. I drove a little bit as well on the windy mountain roads. It was surprisingly easy to get used to driving on the left side on the road, while sitting on the right side in the car.

After a long journey we arrived in the Pai Valley. The sight was really stunning: the town is surrounded by lush green mountains. Even though I love living in Chiang Mai for various reasons (people, food, cheap apartments, great coffee shops, coworking spaces), it’s definitely not the prettiest place to live and some change in scenery and better air quality was very welcome. 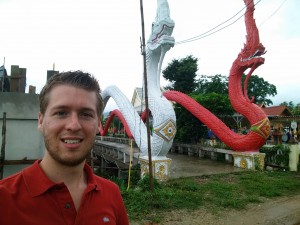 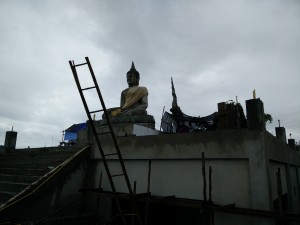 We met up with the rest of our group in Pai, where we started our search for accommodation. We ended up staying in Baantawan Pai Guesthouse, just outside of the town, along the river. It was a beautiful location, with nice modern rooms and an awesome balcony, shared by 4 rooms we all took. As such, we had a huge balcony all to ourselves to enjoy. If you ever find yourself in Pai, whether alone or with a group of people, be sure to check this place out if your accommodation budget allows for 500 Baht/day ($14 at current rate). It’s incredibly cheap by Western standards, especially for what you get, but there’s even cheaper places to find in Pai if you’re on a shoestring budget and won’t mind a little less quality. 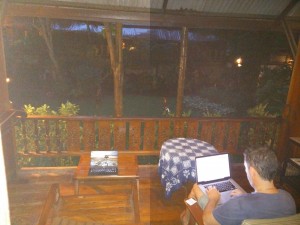 On the Balcony of our guesthouse (with Shaun, my roommate for the two nights here, sorry for bad quality it was already dark when I took this picture)

What struck me most about Pai was the vibe of the place. The town is a very popular destination for the younger western tourists (backpackers and other) for its prices and having a great nightlife. Aside from that there are some westerners there that have been living there (on and off or permanently) for a long time, who seemed to have stepped straight from a 1960’s time machine. As in: hippie hairstyles, clothing, walking around barefoot.

Two nights of drinking, partying and having great fun with the whole group was just amazing. However, I was not just there for the great nightlife, I wanted to see some nature too. So, I took one of the cars and drove with a few people to a waterfall (supposedly). We never made it there, as it turned out we needed to do a 3 hour hike through the river, mud and tiny jungle paths. While that would have been great fun and a good adventure, none of us were really equipped to do it (I was on flip-flops…). The hour we did spend there was great though.

Since the rest of the group had woken up when we went back (Miracle Morning, remember from my last blog post? I’m an early riser now, even when going to bed at 2 am), it was time to go to the Hotsprings. Geothermal heat here causes the water to warm up to the boiling point and then the further downstream you got, the cooler it gets. The baths around 35-37 C are open to swim in, they feel very hot, but it’s a nice way to relax. 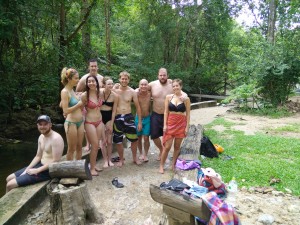 Hanging out at the hotsprings with (most of) our group

Since I missed the sunset at the Canyon that day due to getting a massage (I don’t regret that…), I decided to wake up at 5.30 to watch the sunrise instead… beautiful! 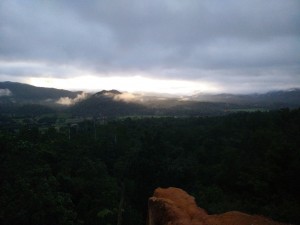 Most of the group left that day and took the cars with them. I decided I wanted to experience a bit more nature (and less nightlife), so I rented a scooter, booked a smaller room for another night and had some more relaxation with the other people that stayed at another hotspring.

After that almost everyone left, except for myself and one girl from the group, Shelley. We decided to go check out the cave, which was about an hour drive north of Pai, over a mountain. Quite a ride on the scooter, especially since the scooter wasn’t that powerful and had a tiny gas tank. We made it up the mountain, but were almost out of gas and actually had to buy gas from one of the small shop owners there, who happened to have a few whiskey bottles filled with gas…

The cave itself was one of the weirdest and most adventurous things I’ve done in Thailand. It involved an old lady with an oil lamp as our guide, a bamboo raft that was pushed/pulled by a guy walking in the water, a huge spider, two snakes and a LOT of bats… Totally worth the extra day stay though, it was so much fun. I managed to catch a COLD IN THAILAND though on the ride back, since the temperature can get pretty low up in the mountains after dark on a scooter! 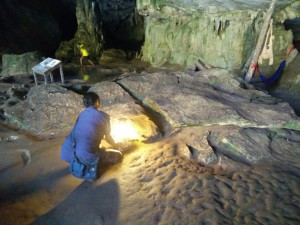 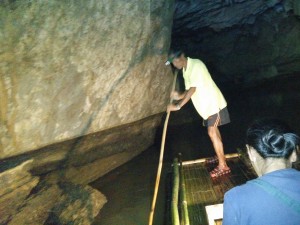 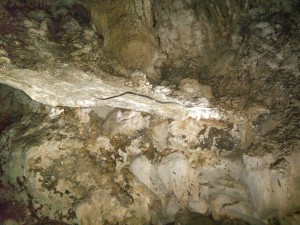 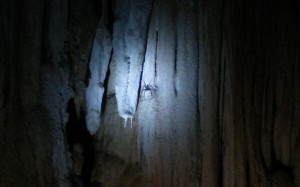 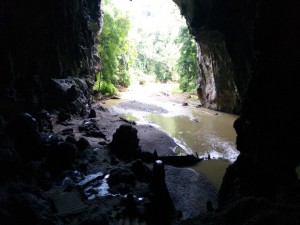 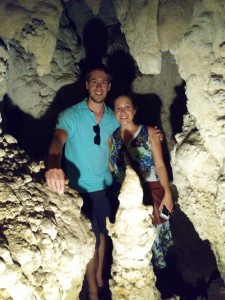 Some awesome pictures from the cave (from left to right, top to bottom):

The next day was spent mostly relaxing from the busy holiday, taking a few short scooter rides to a mountainside Buddha statue and a nearby waterfall. The bus back to Chiang Mai turned out to not be nearly as crazy as I was told, it was quite comfortable, safe and relatively fast.

Overall this experience was just like a holiday and it even gave me post-holiday feelings today. Can you believe I’ve actually started to experience Chiang Mai like a home to return to from a holiday in Pai?

So, now back to getting some work done here. I’ve kinda let my business run itself on low gear for a few days and there’s a lot of stuff to catch up on. This was the kind of experience I was hoping for when setting out to travel though, it’s completely unforgettable. If you ever find yourself in Northern Thailand, make sure to visit Pai (and bring friends, they make it 10x better!). 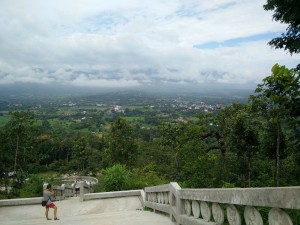 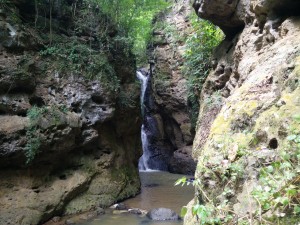 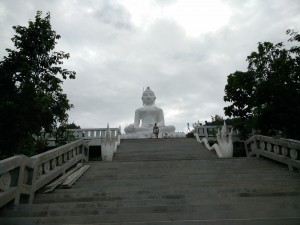 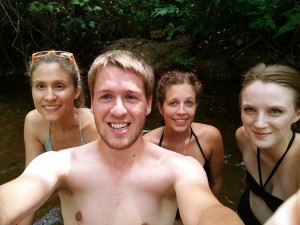 The white Buddha statue on the mountain next to Pai and enjoying the hotsprings with Alex, Shelley and Christa.

Fell out of bed feeling down. This has brgntheied my day!